1. Do you believe in Heaven? I don't know if I believe in a place like we see in the movies, but I do believe in "something" after we die. (If there is nothing, I'm going to really be pissed 'cause there are a lot of people I intend to see again when it's all over.)

2. Have you ever come close to dying? I don't think so. When I was very little I was playing in a lake and had to be pulled out by a lifeguard. That was the closest.

4. Would you ever consider having plastic surgery? No. Unless to correct some horrible disfigurement.

5. What do you wear to bed? Depends on the day. I either fall asleep in the clothes I was wearing (remember, I sleep in a recliner), or I change into pajama bottoms and a t-shirt or, if it's hot, shorts and a t-shirt.

6. Have you ever done anything illegal? Sure. I was a candy thief as a small child. Routinely stole small chocolates from our corner grocery store. And I sometimes exceed the speed limit, though not as often now as I did in my wild and reckless days.

7. Who was the last person that you touched? Walt

8. Where did you eat last? Jack in the Box (isn't that pathetic?)

9. Besides your own blog, are there any that you routinely read but never comment on? I read so many that yes, there are a lot that I read routinely but have never commented on.

10. Ever been involved with the police? Define "involved." I've never been on the bad side of police involvement, but there have been several instances where we've been victims and have had chats with the men in uniform. The last time was when the guy broke into our house and I found him sleeping on the couch. First time I ever called 911.

11. Do you talk in your sleep? I don't know. I never stayed awake to listen.

12. Now a celebrity fantasy. Who would you take on a ménage à trois for a dirty weekend? That is so far outside the realm of my imagination that I can't even begin to think of anybody.

13. Do you feel that you’ve had a truly successful life? yes

14. Where do you wish you were? I'm content right where I am.

15. Have you ever ridden in an ambulance? yes--after I dislocated my shoulder in that disastrous ride that ended my biking "career."

16. Is there any type of dancing that you love to do? No. I'm a rotten dancer.

17. Last gift you received? A drawing of a panda eating bamboo. 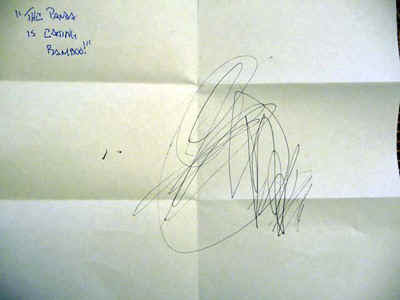 18. Last sport you played? uh..... click the remote? (Thank you, Kwizgiver, for that perfect response)

20. Current Song? John Lennon's "Imagine" because I watched this video (and YOU should too!)