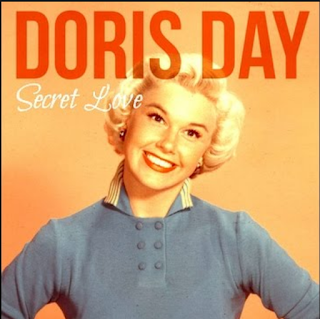 Welcome to Saturday: 9. What we've committed to our readers is that we will post 9 questions every Saturday. Sometimes the post will have a theme, and at other times the questions will be totally unrelated. Those weeks we do "random questions," so-to-speak. We encourage you to visit other participants posts and leave a comment. Because we don't have any rules, it is your choice. We hate rules. We love memes, however, and here is today's meme!
Secret Love (1953)

Unfamiliar with this week's song. Hear it here.  I love doing this song because it was from her movie Calamity Jane, the soundtrack of which was one of the very first LP records I bought as a kid.

Rest in peace, Doris Day (1922-2019)
1) In this song Doris admits she's spoken to the stars, "the way dreamers often do." Do you often daydream?
Always.  I have weird daydreams.  When I am reading something and am starting to feel sleepy, my brain rewrites a scene into whatever I'm reading.  When I "come to" and go back to the book the scene my brain wrote has nothing to do with the story, though it has all the same characters.

2) What's the last secret you kept? (It doesn't have to be romantic.)
I learned how to keep secrets typing medical notes for an ob/gyn clinic.  I was very careful to forget all the personal secrets that I uncovered, so well that now when I am told a secret, I don't usually remember it myself, unless it requires me to do something.

3) While "Secret Love" was one of Miss Day's best-selling records, and the song won an Oscar, she did not perform it at the Academy Awards Ceremony. She said she was just too nervous to sing it live before an international television audience and an auditorium full of entertainment professionals. When did you last suffer an attack of nerves?
Good lord, I suffer nerves about everything.  I'm nervous speaking to an acquaintance at a party (not a friend, fortunately).  I'm nervous making a business-type phone call.  Heck, I'm even nervous to check my bank balance on line for fear I won't understand it.

4) Doris' well-publicized attack of Oscar stage fright was unexpected because she began her career as a band singer, performing before live audiences every night. But she reportedly did develop more phobias over the years, including a fear of flying. Is there anything that scares you now, as an adult, that didn't frighten you as a child?
I am more nervous now driving/riding on the freeway than I ever was before some 30 years ago.

5) Doris Day made 39 movies between 1948 and 1968. She said one of her favorite things about filmmaking was working with costume designers on her wardrobe. Do you enjoy shopping for clothes?
I hate it.  When you are built like I am it's terribly embarrassing to shop in the fat ladies store and discover they have nothing that fits you.  And if it fits you, it looks terrible.  I can't remember when I last shopped in a store for clothes, but it's probably been 10 years at least.

6) Doris confessed that when she had to lose weight for a role, she gave up ice cream. If we checked your freezer, would we find any ice cream?
You would indeed.  We have mini Haagen Daz bars for dessert every night so there is almost always ice cream in the freezer.

7) In 1985 she hosted a cable show called Doris Day's Best Friends. She used the show as a platform to promote pet adoptions and animal welfare. Most of the guests were celebrity friends who reportedly donated their salaries for appearing on the show to Doris' pet foundation. Did you more recently ask a friend for a favor, or perform a favor for a friend?
It's a little thing, but the last favor I asked for was when I asked Ned if he could change the water bottle in our water cooler for me.

8) For more than 20 years, Doris co-owned the Cypress Inn in Carmel, CA. The Inn expects to continue on without her, and maintain the pet-friendly policies she introduced. Have you ever traveled with your dog or cat?
Only once.  When we first got Sheila, I took her everywhere with me.  We took her camping once (though not overnight) and it was fun, but since we usually had two dogs and traveling with Lizzie was a pain and Polly won't ever settle down, we leave her home when we go anywhere.

9) Random question: What's the last thing you complained about?
Well, THIS week it's the damn new laws going into effect in Alabama.  Or maybe the impending war in Iran.  Little things like that.
Posted by Bev Sykes at 12:00 AM