I received the sad news that my friend, Joan Callaway, died this morning.  Joan was a very special woman, who made a difference in the world.  This is an article I wrote about her in 2011:

It was New Year’s Eve, 1970, when Glen and Joan Snodgrass packed up their Soda Springs cabin after a skiing trip and returned to their Davis home on Mulberry Lane.

Joan remembers tucking the covers in around 12-year-old Keith. The family, except for Marci, who had remained at Soda Springs to ski another day, went to bed.

The unthinkable happened. Son Mark shouted that there was a fire in Keith’s room. Glen and Joan rushed to get their children and the dog out. Daughter Laurie shouted that Keith was still in the house. Glen broke a window and, with help from Joan and Laurie, pulled Keith out onto the grass as the fire trucks arrived.

Joan knew Keith was badly burned and he was rushed to the old Davis Community Hospital, against Joan’s wishes. (She wanted him taken to the UC Davis Medical Center in Sacramento, but the firefighters insisted he had to be taken to the nearest hospital.) Joan rode beside her son as they raced to the hospital, and was aware that he had lost consciousness.

This many years later, Joan — now Joan Callaway — remembers little of exactly what happened during that awful night but clearly remembers the days that followed, and the subsequent death of her son and her husband.

She has written a book about her experiences, the story of one woman’s climb out of the abyss after sudden loss, a story of survival, coping and eventual healing of the whole family.

The book, "It’s an Ill Wind, Indeed, … that blows no good" is available at The Avid Reader, 617 Second St. in downtown Davis or as an eBook through Amazon.com

The book grew out of a writing group Joan joined about eight years ago, with Davis Enterprise columnist Bob Dunning’s mother, Dorothy. Joan intended to write her story in a linear fashion, starting with her birth and childhood, but when Dorothy asked if she was going to write about the fire, she got to work.

"I wrote a little something and then I couldn’t stop,” Joan recalled. “I had to just do it. It was like opening the floodgates. There were a lot of tears and some laughs, but it demanded to be written."

She paints a no-holds-barred picture of the grief following the tragedy — how her friends and neighbors rallied around to take care of the family, how others turned away, embarrassed that they didn’t know what to say.

"I took long, solitary walks in the dark hours of pre-dawn morning trying to come to grips with what was happening to us … anger surfaced again and again. … I kept waking night after night praying that this was a nightmare, hoping against hope to reach over and find Glen there in bed beside me. If only …"

She speaks of the isolation she felt in her circle of married friends, and how she drew away from them. The pain of the "firsts" — first holidays, first birthdays, first anniversaries — all were now part of her family’s new reality.

There were papers to sign, a house to rebuild and sell, legal matters concerning the cause of the fire. Her anger and depression deepened as she began the process of rebuilding a life with her four surviving children.

Slowly, Joan began to come back to life. She worked with psychologist Louise Wilson to start a group that was called Bereavement Outreach.

"There was nothing in Davis except singles groups," she recalls. "Louise was working on grief at Sac State, and she’d been doing a lot of reading and I’d been doing as much reading as I could find and we decided that maybe there was a need."

With help from Herbert and Hanna Bauer, then co-presidents of the Mental Health Association, they started holding meetings.

"We started out with six widowed people," Joan says. "Many of them had been widowed for a long time — like nine, 10, 14 years — and they were still actively grieving and they wouldn’t put in a new chair in the home without thinking about whether their husband have wanted them to do that."

The group eventually expanded to include parents who had lost children.

Realizing her need to make a living, she opened first one, and then another business in town. She helped found Citizens Who Care, an organization which helps the frail elderly and their care givers, and later was instrumental in the opening of All Things Right & Relevant, a thrift store, which benefits a handful of local nonprofit organizations.

She continued to raise children who have become successful in their fields and ultimately found love again, with her marriage to Ed Callaway.

Her story is unforgettable and will serve to inspire and perhaps amaze those who don’t understand how one can rebound after a tragic loss.

Joan was handed lemons and continued to make lemonade. Her book shows how she did it, and heaps praise on the people who helped her all along the way.

One beneficiary of some of the services that Joan helped start wrote, "You have clearly put your life, your losses and your extraordinary energy to good use all your adult years. I believe there are known and unknown angels in every life, and you have been one of the heretofore invisible angels at work in ours."

In these recent years, Joan had worked tirelessly, holding writing groups helping people write their memories. Someone wrote on her page today that she had been inspired by her tenacity. Her " can-do" philosophy.. And her unquestionable love for her fellow man. For Women's Rights. And love of children.

I was part of her occasional lunch group, where our discussions always turned political.  Our group started during the Bush administration, when we called ourselves the "Bush Bashing Babes."  We enjoyed 8 yrs of Obama and lately have been much more active!  She started getting volunteers together to write postcards trying to get people to the polls to vote for Democratic candidates.

She made a difference in this world and she will be sorely missed. 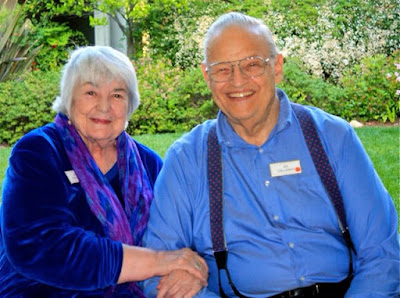 Email ThisBlogThis!Share to TwitterShare to FacebookShare to Pinterest
Labels: Joan