Next Best Thing To...

People are always saying something or other is the "best thing since sliced bread."  But did you ever think about we came to have sliced bread?  I participate in a "Trivia a day" thing which asks various multiple choice questions.  Today's question was "who invented sliced bread."  I guessed wrong.  Here is the correct answer: 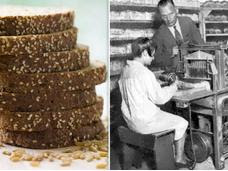 In 1927, a jeweler named Otto Frederick Rohwedder created the first automatic bread-slicing machine for commercial use. Rohwedder, the owner of three jewelry stores, used his work with watches and jewelry to invent new machines. Convinced he could develop a bread slicing machine, he sold his jewelry stores to fund the development effort and manufacture the machines. In 1927, Rohwedder successfully designed a machine that not only sliced the bread but wrapped it. The first loaf of sliced bread was sold commercially on July 7, 1928. Sales of the machine to bakeries increased and sliced bread became available across the country.

By 1930, only two years after the debut of sliced bread, Wonder Bread was building its own machines and distributing pre-sliced loaves of bread throughout the United States. This product is what put Wonder Bread’s name on the map.

I appreciate Mr. Rohwedder whenever I make my own bread and try to slice it.  Even with the help of an electric knife, I can never get the slices uniform...and thin enough.  So thank you, Otto Rohwedder.  Nothing is the best thing since sliced bread.

However, lunch with old friends may come close.  Our friend Grainne has been here from Ireland again and is about to return to the auld sod, so a group of eight of us gathered at the University Retirement Community to have lunch and tell her goodbye until she returns again (which she does about four times a year).  We spent about an hour and a half and discussed everything from death, dying and dementia to turkeys in Davis to Frederick's of Hollywood.  But what happens at these lunches stays at these lunches!  Suffice to say there were tears and lots of laughs.

I also got my first pocket letter finished and mailed off to my partner. 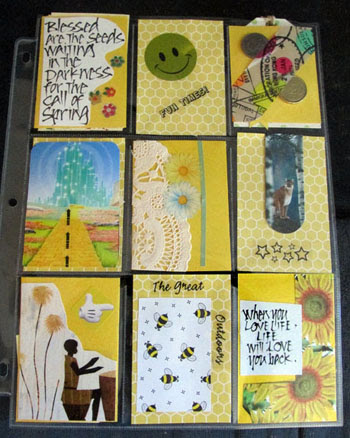 Reading more about this craft today (after sending this), some consider this a different type of letter, where you are sharing something of yourself as you type.  I didn't really do that, but I am happy about how this turned out.  It was a "yellow themed" pocket letter.  Six of the pockets were supposed to have gifty "stuff" in them.  So starting at top left behind that are a few tiny note papers, then behind the smiley face are a bunch of smiley face stickers.  The next pocket has tags in it and the tape across it is like packing tape which holds down two foreign coins.

In row two, I had to use the yellow brick road, of course, and the pocket contains Wizard of Oz stickers, the middle pocket has a card of washi tape samples and I actually changed the pocket on the right I had used the book mark that you see (one of the magnetic ones) but then found one in a gold color with a nice quote on it and I substituted that because it was more in keeping with the yellow theme.  The pocket itself is empty.

Bottom left contains a personal letter from me and the next two pockets are empty, but just had a bit of a design on them.

As I said, I have never done this before and am not really very crafty but I found my craft genes were stimulated as I worked, so I've signed up to do a music-themed pocket letter and someone in Belgium is looking for someone to make a San Francisco themed pocket letter, which I thought would be a lot of fun, so I offered to make one for her.