Back in the 1980s, a doctor in the office for which I was transcriptionist gave birth to a daughter she named Meredith.  I'm not sure why I had to type that word so many times ... we probably had lots of patients named Meredith.

I cannot for the LIFE of me, even today, type the name Meredith without first typing Meredity.  I heard from the publicist for a Sacramento theater today and I went to respond to her message.  "Thanks, Meredity" I typed. Thirty years I've been typing that name and still can't type it correctly the first time.

As I grow older, my typing gets worse and worse.  I still type fast, but spend almost as much time correcting typos as I do actually typing texts.  There was a time when I was tested as typing 135 words per minute with only one error.  Now if I type 135 words, chances are that there will be errors in half of them, or more.

There are three types of typos that I make consistently, two I understand, the other I don't.  There are the usual actual typos where you type the wrong letters.  For many, many years, the ring finger and pinky finger of my right hand had become numb.  Any word that I typed that had an O or a P in it had to be corrected because 9 times out of 10 the fingers didn't hit those keys.

I had a very painful nerve conduction study done in 2009 (I described it as a 30 minute electrocution!) which identified the problem as a pinched nerve and the only options offered to me were an experimental surgery which might not work (the doctor was not optimistic), putting a splint on my arm to hold it straight for several months (not acceptable for a typist!), or hope that the problem would eventually resolve itself.  I chose the latter option.

I learned how to deal with it and miraculously at some point last year, after nearly 8 years, I realized that the numbness was leaving my ring finger.  A year later, it's almost normal again and the numbness is starting to leave my pinky finger too.  It may or may not return to what was "normal" but it's 1000% better than it has been for many years. It no longer explains most of my typos.

The other typos I make concern words that run together.  I look up at what I have typed and may find that three or four words are all typed as one word.  I couldn't figure out why that could possibly be until I was using my laptop and realized that I didn't make that mistake on that machine.  I decided that the problem started when I got my new computer and figure that if I get a new keyboard with better defined keys, I might type more accurately...or at least not run my words together any more. I may eventually get around to keyboard shopping. 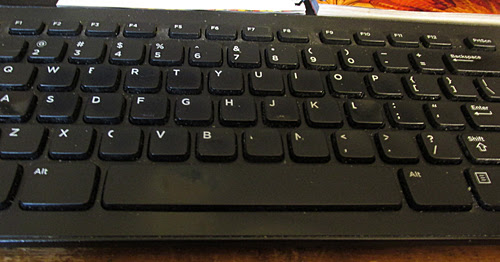 I think the problem with this keyboard is that the keys
are not tall enough, if that makes sense

For example, I was recently captioning a photo and was typing the word "famous" and when I looked at it, what I had typed was "family."  That's sorta kinda logical to explain, getting the first part of the word typed and my brain filling in the rest (kind of like that annoying auto fill that your cell phone does!)

But the ones that really worry me are the times when I am thinking of a word and when I look, I have typed a completely different word that has no relation to the word I was thinking of.  Or I mean to type the name Richard and instead type the word Robert.  That's a bit of a stretch, even for auto-fill!
It is clear I will never be a professional typist again.
Posted by Bev Sykes at 12:00 AM

Email ThisBlogThis!Share to TwitterShare to FacebookShare to Pinterest
Labels: typos

Damn, but we're scary. Only my problem was an injury to my left wrist, which damaged nerves to the ring and little fingers on that hand. The pinkie still tends to wander around the keyboard. I haven't started the word transposition yet, but now that you've mentioned it.......