As usual, it was a low key Valentine's Day.  Walt came home from Church, having stopped en route to buy me some beautiful roses. 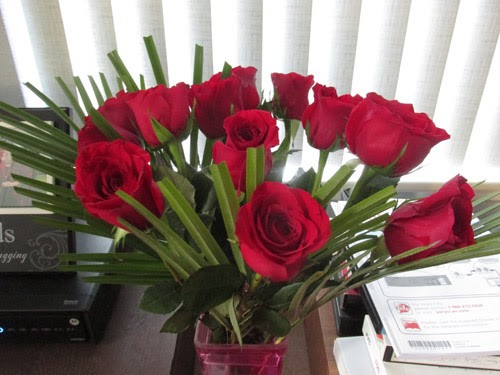 I had bought a small box of See's candy for my mother and while at the See's store bought 1.5 lbs of peanut brittle for Walt (he graciously let me have some too).

At 11-ish we went to Atria, where we met Ned and Marta.  They had brought small boxes of See's for both my mother and me, so that was nice!  He also brought along the book they had just received, one which Alice Nan and Joe made with pictures of their time in Jamaica. 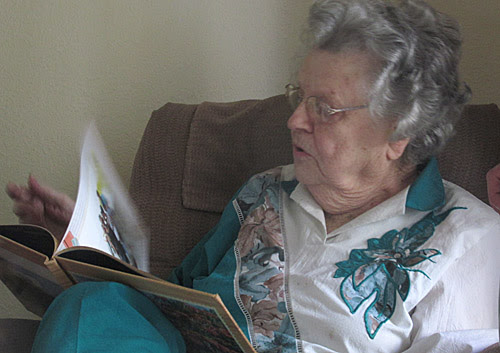 In due time we went to the dining room for lunch.

The last time the 5 of us went to the dining room, they never received our reservation so there were no table reserved for us.  The head server that time was all flustered and kept wailing "but you have to make reservations at least 48 hours in advance" but a nice waitress named Jasmine took care of us and did so without wails, without complaint, efficiently and with a smile.  I wrote a note praising her to the Executive Director.

But this time I knew better.  The minute I talked with Ned about meeting at Atria for lunch on Valentine's Day, I called for reservations, and made sure I told the girl who took the reservation that we had problems last time so to be sure to let the restaurant know.  She assured me she would.
She didn't.

They had reserved tables all over the dining room, but none for us but the head server this time (a different one) wasn't really flustered. Ned assured her we could fit five of us at a table for 4 and our server was once again Jasmine, so all went well.

The dining room was all decked out with balloons and the barbershop quartet which sings each year was back again to sing for us.  My mother didn't even look up when they came to sing for us. 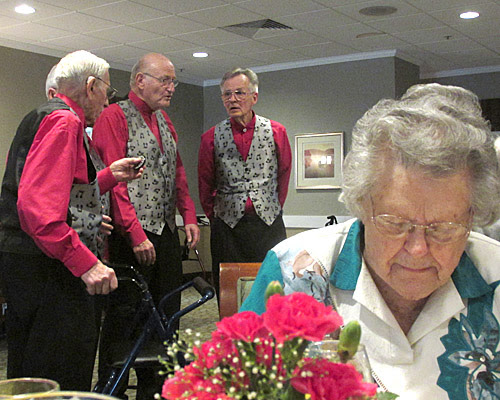 I keep thinking she will respond positively to music, but I guess she had so many decades of it with my father that it's nothing special to her any more.  But Walt and I were tickled that the guy on the right end is a friend of ours from the defunct Davis Comic Opera Co
.
After lunch we returned to the apartment for awhile.  Ned has been recommending the movie Idiocracy to me for awhile and now that we have a working DVD player again, he loaned it to me.  He spent some time describing the plot of the movie to my mother which allowed me to get a very rare photo of him when he didn't know I was taking his photo. 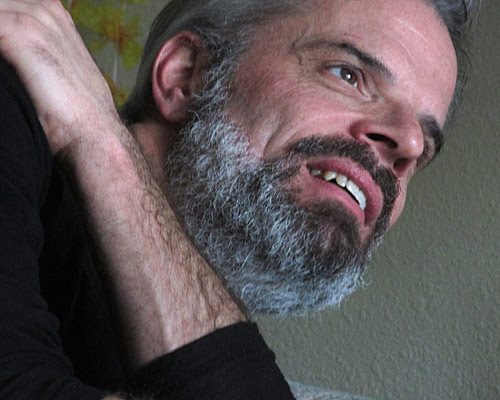 Eventually we all left.  Ned and Marta went home, Walt and I came home to watch Idiocracy (it was, as promised, stupid).

Still full from the huge buffet lunch and the See's I'd eaten, I couldn't even think of dinner, so I heated up one of our reliable Bertolli frozen dinners for Walt and I skipped dinner entirely. 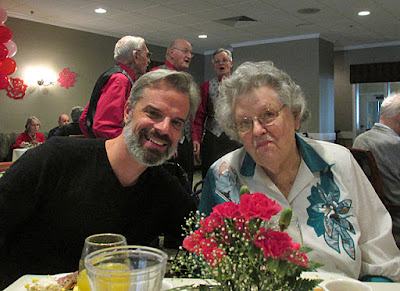