I was shocked to drive out Covell Blvd. the other day, on my way to the back road to I-80. and find...nothing.

No ramshackle hut, no resting fields, no dead vines.  Nothing,

The strawberry field and shack was just....gone!

To my great surprise  when I mentioned the strawberry stand to Walt a few days ago, he was not aware there was one there.

It was about a mile and a half out of Davis and in my mind's eye had been there forever.  I looked forward each year to the stand reopening so I could start buying strawberries again.

It was run by an Asian family and had the best, cheapest, sweetest strawberries around.  When you bought them (and I always bought at least a flat) they were warm and sweet and you could hardly wait to get them home and do something with them. 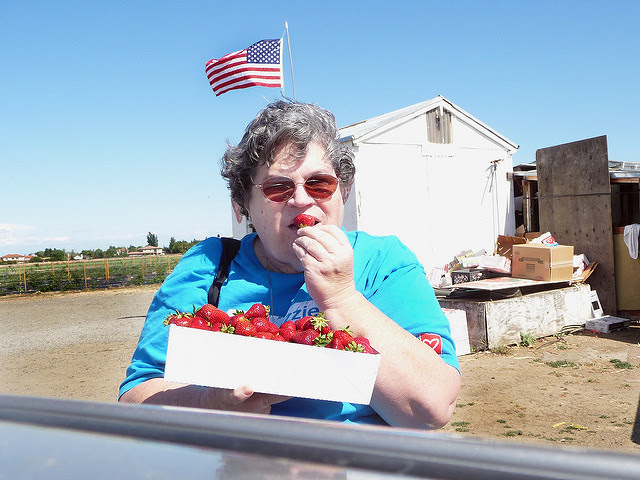 The shack itself always looked like it could be blown down in a strong wind...and it never looked any different.  Some boards thrown up along the sides, always a pile of rubbish, and that American flag waving proudly over it.

For the first years I started buying there they only had strawberries, but lately they have branched out to blackberries with tall vines stretching out into the field opposite the strawberries.

But now there is nothing.  The shack is gone, the plants are gone and all you see is a brown field stretching off into the distance.

My heart is broken!

The proprietor was always a cheery guy who would throw in some other stuff for you at bargain prices...things like zucchini or green beans or some other bit of produce he happened to have on hand.
About half a mile from the stand there was a truck which also sold strawberries from the field to people who weren't likely to turn in at the stand itself.  Sometimes I bought my strawberries there.

What will I do now when strawberry season rolls around?  There is always the farmers market and the fruit stand on the freeway, but it won't be the same as this, my favorite fruit stand.  It was similar in appearance to the cherry stand in Gilroy that we frequent in cherry season as we are driving to Santa Barbara.

But this was in our own back yard.  And now it is gone.

Email ThisBlogThis!Share to TwitterShare to FacebookShare to Pinterest
Labels: strawberries

maybe the cherry fellow passed away and the family was not interested in continuing sadly that happens a lot . a neighbor of mine just passed away and his daughter was in the house cleaning the day after the funeral and throwing things out to the curb . I could not bear to touch any of it . But by the evening you could tell it was picked over and done away with . so sad really people have no respect for the past . Hope you find some strawberrys soon.