All It Takes is a Keyboard

I have been so concerned about my typing in the last few years.  It seems I can't type two words without making 3 typos.  I still type fast because I've learned to correct errors almost as fast as I type.

People who want to borrow my keyboard are very frustrated because most of the letters have worn off from overuse.  I don't need them, but if you don't touch type, it's difficult to use my computer.

I am not quite so error-prone on my laptop, so I wondered if maybe my error rate would go down if I had a better keyboard.  But when I went to shop at Office Max, all they had were the same flat-ish key keyboards like that one I had.  My guru told me what kind I needed to order from Amazon, but I never got around to it.

Yesterday Ned found another keyboard in among the "stuff" (he says it might even have been his that he moved over from Sacramento) and got it installed.  This is the fourth paragraph in this entry and I have made TWO typos since I began, so I think I have solved my problem.

We aren't at the end of the Big Book Sort, but the end is in sight.  So far we have filled 22 large boxes and donated two to a rummage sale.  We have found such weird things.  When we FINALLY get this all done, it still hasn't made a dent in our book collection,, since this is just sorting through the books in t he two rooms that Ned and Marta will be occupying.  There are still books in Walt's office, his bedroom, my office, the family room and the living room. But we don't need to get to them yet.

I sorted through the first box of my clothes (all my clothes are now in boxes awaiting a solution to the termite problem).  I have a kinda/sorta new wardrobe of all the things I'd forgotten I had...and she tells me there are two more boxes to go through.  I have two bags ready for donation somewhere.

I had a nice visit with my mother yesterday. She was very pleasant, very talkative and didn't make a bit of sense. But I just go along with her and it works out all right.  When she used to ask me why her sister(s) haven't been to visit, I used to tell her they were dead, but each time it's a fresh grief and anger that "nobody told me."  Now I just make up a story about where the specific sibling is and that seems to suit her.  She has, however, seen and talked to her mother often, who is in good shape for someone in her 140s.

She pointed to Simba, the dog who lives at Eldervilla, and told me he was a nice dog and asked his name. I told her, and when 2 minutes later he moved to the other side of the couch, she said it was a nice dog she had not seen before. But that's just the way things are these days.  Visits are more for ME, I think, than for her.

Nicest thing was that she told me several times what a nice house she lived in and how much she likes it there. I'M SO HAPPY!


I'm going to start taking photos on my cell phone to show her because that's something we can talk about, briefly--and often.
So on a more serious note -- I'm sure you remember those 1000+ kids that our government kidnapped
and put in prison for months?  You know, the group that had 8 of them die while in our "care."
Well, the latest, if you haven't heard the news,  last month, 37 children, age 5-12, were put in a van for what was to be a 30 minute ride, after which they would be reunited with their loved ones.  The children spent 23 to 39 HOURS in the van.

NBC News obtained emails sent between employees of BCFS Heath and Human Services, the government contractor and nonprofit organization responsible for transporting the children, who were frustrated by the lack of preparation by ICE, and senior leadership at the U.S. Department of Health and Human Services (HHS).... 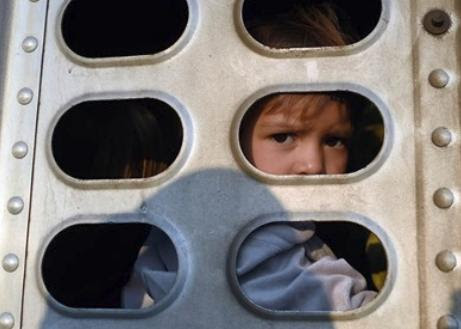 Despite two notifications from HHS that the children would be arriving, ICE officers kept to their regular schedule, clocking out for the day while the parking lot filled with children eager to see their parents again. There was no one present to greet the arriving children and they were not equipped to process them in a parking lot, the BCFS official told NBC News, describing the scene as "hurried disarray."