Why You Have Children

If I ever wondered why we have children, this weekend erased all doubts.

As I write this it is late Sunday afternoon.  I have pretty much slept most of the day.  My body seems to be getting worse.  I've been having some physical problems--getting very weak, progressively, so that I have difficulty getting up from a chair and then walking, can't reach things overhead in a cupboard, have to hold a coffee pot in two hands because it's too heavy, etc. In the last month, it has gotten significantly worse and I saw the doctor this week. Ned and Walt came along to make sure all the questions were asked.  The doctor ordered a CT scan (since I had that glorious fall last weekend), ran lots of blood tests and two came back extraordinarily high, both of which are affected by the statin drug I'm taking for cholesterol. So I'm stopping that and drinking lots of liquids to flush it out of my system, but until I can actually get my legs into a car without assistance, I am not safe to drive. I feel fine sitting down, but the second I stand up, it's like all the energy drains out of me.

Ned has been feeling bad because I don't take showers, but take sponge baths, since it's so difficult for me to get upstairs.  He decided I need to take a shower at Atria.  So Jeri and Phil took my mother to lunch and Ned stayed behind to help me take a shower.  He had bought a shower chair and was just so dear...he put the chair together and presented me with a spa basket with towels, 2 kinds of shampoo, soap, and a bath robe.  He also brought a fan for the bathroom, so it didn't get too warm.  I was so wonderfully moved at his thoughtfulness...and the shower felt wonderful.

After the shower, we were chatting together when my doctor called to give me her suspected diagnosis.  Walt was overwhelmingly relieved.  Me too.  Now we just have to see if dropping the medication works.

Jeri has been driving me, since I don't feel I am safe to drive, and she is very good about helping me get my legs in the car, since I can't do it myself.  She and I stopped for sushi on the way home, and then we all drove to Ned & Marta's, where Ned fixed a soup-and-salad buffet.  Lemme tell you -- Trader Joe's tomato and red pepper soup is to die for.

We left Phil with Ned and the other 3 of us went to see a play at Capital Stage.  It was a great play and a good one to share with Jeri.  Then back to Ned's to get Phil and come home. 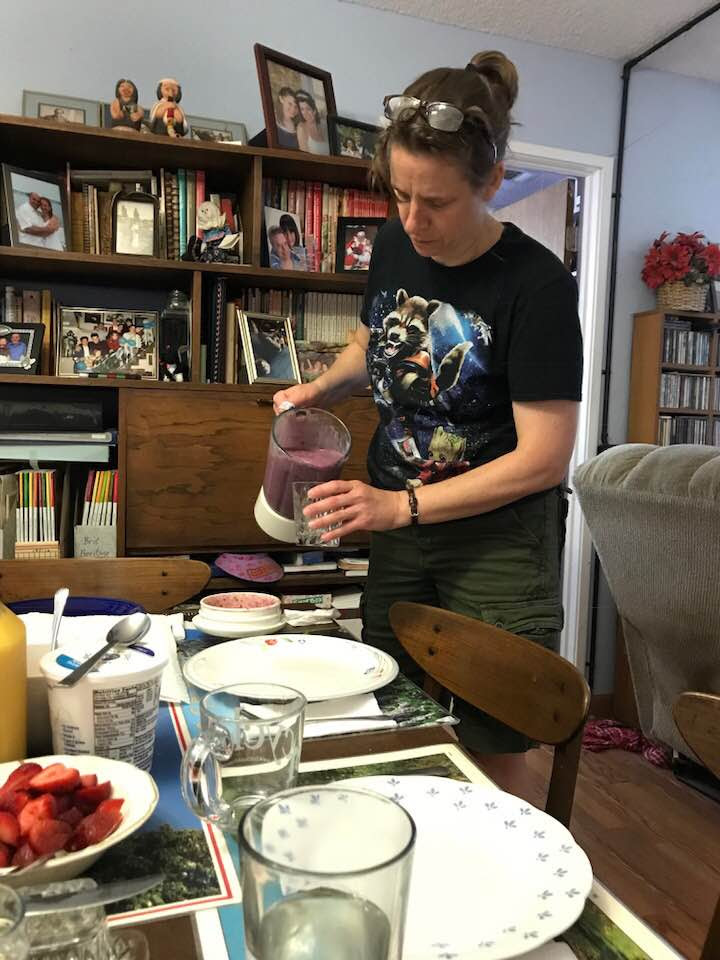 In the morning, everyone descended on the kitchen.  I had hoped to cut up strawberries when I woke at 6, but I fell back asleep and didn't wake up until 9.  By then breakfast was in full swing.  Jeri made a fabulous smoothy with every fruit in the house.

Phil was up to his elbows in waffles.  Ned and Marta brought their dog Bouncer, and Polly got uncharacteristically very protective of me.  Whenever Bouncer got too close, she snapped at her and then sat right by my feet to make sure everything was all right.  As moved  as I have been by how good and caring the kids have been, I was equally moved by Polly's care of me.

I am feeling like a real invalid, since I feel absolutely fine when I'm sitting down, but getting up takes a major effort and I hobble around the house, leaning heavily on my cane.  But breakfast was wonderful. 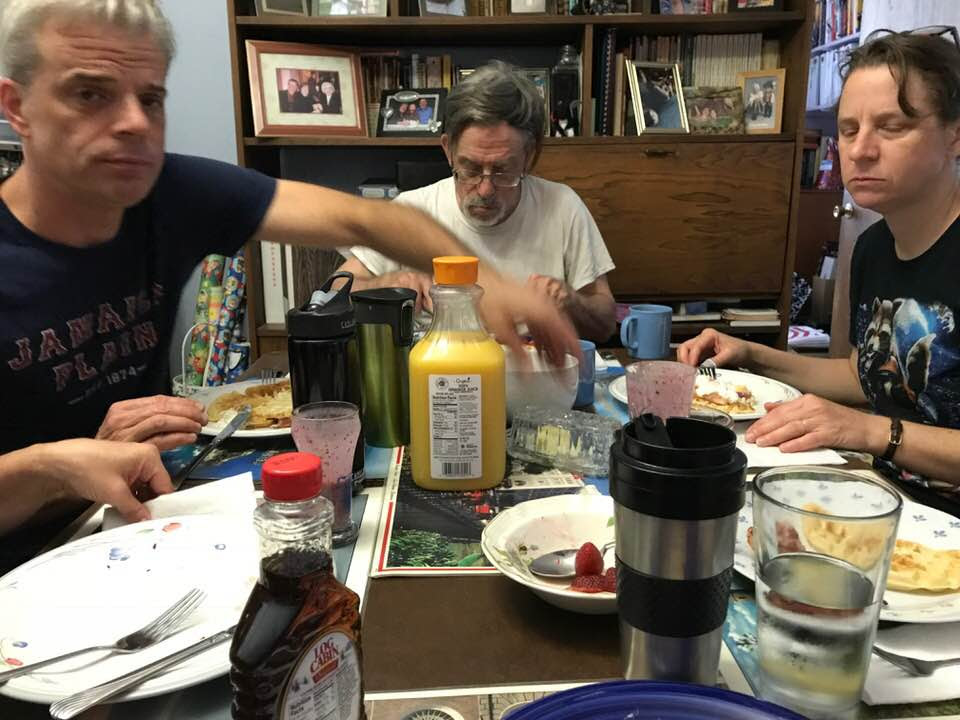 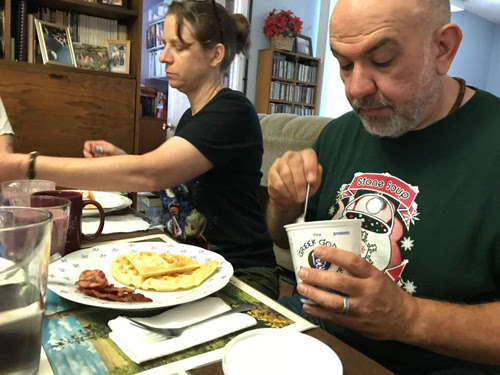 Jeri and Phil were going to a memorial for Phil's stepmother and I took, Walt tells me, four naps this afternoon.

I am feeling all warm and fuzzy about how good  everyone has been this weekend.  It's good to have children!  Especially good, since Walt seems to be developing the cold/bronchitis that I had for the last 3 months.
Posted by Bev Sykes at 12:10 AM

Children are wonderful, aren't they!!!!!

Let's hope it's just the statins. Many people do have problems with them. And, you are very lucky to have such a loving and helpful family.
Arlene