My computer hates me.  Well, my computer doesn't hate me, but a few of my regular web sites hate me.

On Monday, we went to Kaiser for my weekly blood draw to check KC levels.  In the pre-dawn hours, I checked the Kaiser web site to see what the results were.  For the second week, the numbers had gone UP, not down.  No a lot, but I was disappointed.  I sent a Kaiser e-mail to my doctor saying I had read the results an was there anything I should be doing proactively.  The only instruction I had about this "whatever it is" is to stop the statin drug.  Was there anything else I could be doing to help bring the numbers down?

If your blood sugar numbers are off, you adjust your diet.  What if your KC numbers are off?  The only thing I could find on the internet said not to exercise and to reduce red meats.  Well, "not exercising" is a given and I have already cut way back on meat, just because I am losing my taste for it.  So what else could I do?

In the mid-morning, I received an e-mail that I had mail waiting on the Kaiser site.  But I could not get into the site!  I have used the site ever since it started, many years ago.  My log in and password have not changed and, in fact, are imbedded in the site, but when I tried to log in exactly the way I had done a couple of hours before, it said I had the wrong password.

I tried everything I could think of and finally just changed my password.  It accepted the password change and took me back to the log-in page where I put in the freshly accepted password and it said it was the wrong password.

OK.  So I tried doing trouble shooting and it asked me to put in my medical record number, which it also didn't recognize!  Apparently I no longer exist.

I sent a message to tech support and received a nice note thanking me for my note and saying they would get back to me within three days.  Well, that didn't do diddily squat for reading my doctor's email today.

I finally called member support, the number you call when you need medical advice, and the nice lady there was able to access my account and read me the note from my doctor.  I asked how I could get a message back to my doctor and she set me up with a phone appointment for later in the day.

The doctor called and seemed unconcerned about the latest numbers.  She asked if I had been exercising before I took the test.  I scoffed.  She said to just have the test done again next week and be sure not to exercise, even not to go for a walk, beforehand.  I told her that was the easiest direction I had ever received.

In the late afternoon, I received an email from tech support asking me to call them, but it was too late by the tie I saw it, so I'll start that process this morning.  In the meantime, at least m doctor knows I am not reachable by email until I write and let her know that I exist again.

The previous night I had not been able to get to sleep at all, until about 6 a.m. and then was awake at 7, so I was sleepy yesterday.  Fortunately, Walt was off to Berkeley for his dental appointment and I was able to get some sleep.  It came in short bursts, 15 minutes here, an hour there, etc., but by the time he got home, around 5, I was waking up from about an hour of sleep.  I wasn't hungry at all, so just had a cup of red pepper tomato soup (my new great love!) and then went back to napping thru the rest of the night, off and on, until I was wide awake at 4 a.m.

In one of my waking periods yesterday, I opened a package I had received from a SwapBot partner who included this very clever 2-sided draw string bag with pouches on each side.  People are SO talented! 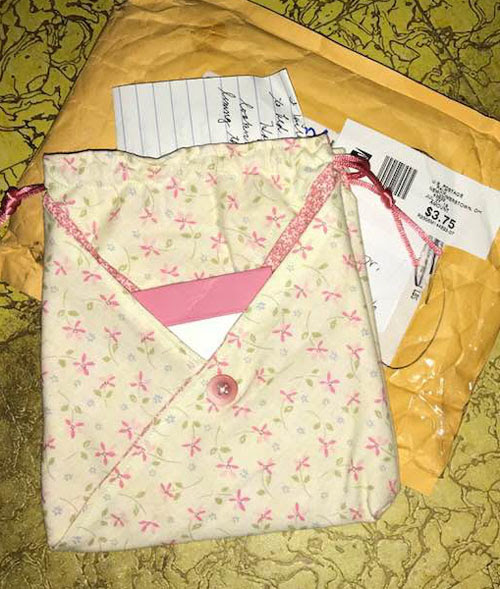 The craft gene definitely bypassed me.   I have other talents, but crafting is not one of them!
Posted by Bev Sykes at 6:08 AM

Email ThisBlogThis!Share to TwitterShare to FacebookShare to Pinterest
Labels: Kaiser

I am writing to you to let you know about Emily’s Virtual Rocket. It is a news blog to keep people informed regarding transgender issues. In addition, gay, lesbian, and/or bisexual issues are also covered. Here goes:

Thank you very much!