The Boys from Brasil

I have spent a lot of time on the phone with Compassion today.

It started yesterday, when I happened to log onto Compassion's web site. I actually have forgotten now why I did it. It's not a site that I check often, since I am not looking for any new children to sponsor -- I'm done tapped out at this point.

I think I went on to send a birthday gift to little Fred, my correspondence child in the Philippines. His birthday is in August and I realized I needed to get the gift out this week to be sure that it arrives in time for his birthday.

But what I saw when I logged into the web site surprised me. There was a little note that I almost didn't see which said that my Brasilian sponsored child, Pedro, had left the program and offering me another child which I could accept or reject as a sponsored child. 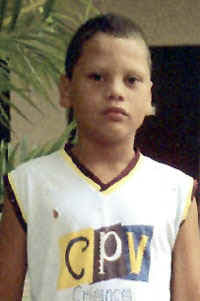 Pedro was the second child I sponsored through Compassion. After choosing Anjali, in India, I realized that what I really should have done was to sponsor a boy in Brasil. We have such ties to Brasil and I've been around male-type people from Brasil for such a long time. I started writing to him exactly two years ago. He doesn't write frequently, but he draws great photos and I've had some nice letters from him too.

What really bothered me was that I read about this on their web site and that I had not been contacted directly. There was no indication of how long ago this notice went up. There was also nothing whatsoever about this child they were offering as a replacement other than his name (Henrique), his age (4) and his location (Brasil). I was supposed to, apparently, accept or reject him sight unseen. I wanted to see his picture first because based on the great need that was exposesd by the Filipine bloggers, I thought I would prefer to choose an older child from the Philippines instead.

I went to Our Compassion, which is somewhat like Facebook for Compassion sponsors. And I wrote a note about how upset I was to learn this information so coldly.

It turns out that others have had the same situation and the problem is really one of technology not keeping up with other methods of communication. Apparently when a child leaves the program, the information goes into the computers which serve the web site(s), but the actual notification of the sponsor has to go through whichever offices assemble stuff for mailing.

I was a bit mollified to learn that and, on everyone's suggestion, I called Compassion this morning and learned that this was indeed the case. Pedro was pulled out of the program by his mother, who wasn't interested in participating any longer (which makes me sad for Pedro). They reported that he had received the birthday gift I sent earlier this year (which he did not have time to respond to yet). She also said that she could make the photo of the suggested new child available for me to look at on the web site. 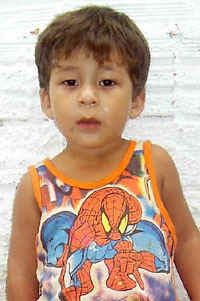 Well, look at that face? Am I going to say "No, I don't want to help this child"? So of course I said yes to Henrique, four years old, living 22 km north of Fortaleza in the northern part of Brasil. She said that Compassion would send me the jpg of his rather blurry photo on the web site but that it had to come from a different department and it might take a few days before it could be sent.

I was able to write him a "hello" letter and while I was working on it, the mail came. In the mail was a packet from Compassion. "Aha," thought I. "Here is the information on Henrique."

But no. Of all things, it was a welcome letter thanking me for agreeing to sponsor PEDRO, giving me a brochure about the area of Brasil where he lives, and his photo, and encouraging me to write to him.

So, I called Compassion again (third call of the day) and spoke with my third representative and explained the situation to him. There was a lot of "gee--that's strange" and a lot of searching the computer, but eventually -- I think -- things got straightened out (we'll see when the next package comes). This guy also said he could send a jpg right away, which he did. It was fuzzy, over exposed and a little blurry, as it showed up on the web site, but with PhotoShop magic, I was able to get the clear photo that you see on the page here.

This was taken in 2009, so he should be due for an updated photo soon. The full size photo makes him look like he's between 2 and 3.

The guy I talked to also let me know that I could write a goodbye letter to Pedro, which made me feel better. I did that this afternoon. Pedro was not one of the ones I felt real close to, but he was one of the ones I had sent some really cool stuff to (like an explanation of football, translated by our Brasilian son, Eduardo) and I'm sorry I never heard about those gifts. But then, it's not about me, it's about Pedro and so I sent him a sad goodbye letter and hope that I left him feeling good about our brief relationship.

So now it's on to a new sponsorship, a new relationship, and a new Brasilian in my life.

Im so glad that this made you feel better and so sorry about the other boy .