[Be sure to check out the new pix of Brianna that Tom sent to me, which I posted on Flickr.]

I have a feeling that Tom's not going to be looking through boxes of books to find his copy of my book, How I Did It (the copies of my diary when the kids were growing up, that I had printed and hard-bound for each of them), so now that he has been through the birth of his daughter, I thought I would record what his own birth was like. He and Laurel maybe able to relate better. 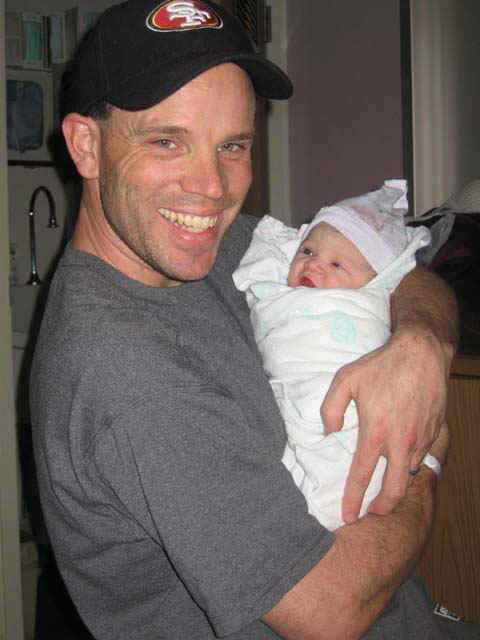 (Note that Daddy is wearing his 49er hat!)

Contractions started Sunday morning around 3:00. As with Paul, the contractions were about 10 minutes apart, moderately strong, and just stayed like that for hours. I finally went to the hospital about 1:30 only because Paul had gotten up from his nap and wanted to sit on and climb over me and I figured things would be easier at the hospital than at home. (Momma and Daddy had come over around 8 a.m. Daddy, as usual, had rushed, tho I had told Momma when I called that I probably wouldn't be going to the hospital until afternoon.)

Got to the hospital and was examined by a very nice young lady doctor, Dr. Rice, who said I was 3 cm dilated, effacing nicely, and could be prepped. Got "the works," retired to the labor room and started contracting a bit closer together (about 5 minutes apart then).

About an hour or so later, Dr. Rice came in to check me again and said I hadn't progressed very far. She decided that since the bag of water was bulging, she'd break it, which she did. Then, as with Ned, when they broke my water, the contractions started getting "wild," as Dr. Nuddleman once described them.

I was pretty uncomfortable and thought I must be in transition because my hands were numb and I was trembling. The nurse decided to check my progress and did a pelvic. With the first contraction she said, "Oh, that's much better" and then with the second contraction, she said "the baby is coming now!" and rushed out for a table to move me.

Dr. Rice, who had figured I was good for another hour or two, had gone downstairs and came rushing back yelling, "it's not fair; you were supposed to wait for me!" She and the nurses were telling me not to push and I was trying not to and complaining that it was easy for them to say, but not exactly easy to do.

At one point I asked Dr. Rice whether we were waiting for the baby or for her, but she didn't answer.

Finally I got those lovely words, "push" and Tommy's head was born. I was able to watch his nose and throat being cleaned out and him crying before his body was born, then he came out and the guy assisting said "it's a boy."

Dr. Rice had said I could nurse on the delivery table but at the same time she was trying to instruct this guy on how to sew up an episiotomy and he was having quite a hard time and I decided it wasn't worth the trouble--especially since they had handed me Tommy, but nobody offered to help me get ready to nurse him. He was kind of quiet anyway and probably wouldn't have known what to do.

They finally took him away to the nursery and came back a few minutes later to report that he was 8 lb 7 oz, which rather shocked me since he was so much bigger than the other three clowns.

Stitching me up took quite awhile, with Dr. Rice offering such encouraging comments as "that's going to be kind of a sloppy job." They gave me lots of shots of a local anesthetic because the guy was taking such a long time and I could feel just about every stitch. I was also making it difficult for them because I had developed tremors and was shaking all over and hence very jumpy and each time I felt the needle I jumped.

When Walt called home to tell them about Tommy, he said "would you believe 3 boys" and my father just about had a heart attack because he thought I had just had triplets.

And, I don't want to be discouraging or anything, but if Laurel and Tom are thinking about having more kids, they might want to read what follows. Tom was born July 5, this entry is dated July 27:

Today has been a real gem. It started out by Ned crying for half an hour. By the time he became reasonable, the neighborhood had arrived. Today I just couldn't take them and kept them outside for about an hour, but they eventually started infiltrating. I somehow managed to get dressed. Jeri usually bring two friends in to ask for juice about the time I start getting out of my nightclothes. Paul, the little boy from up the streeet, let Mutt [the dog] out --not once, but twice. Ned threw a tantrum at lunch time and was put to bed. He was followed by a sour-faced Jeri, who was quite snotty about going down for her nap and as soon as she was on my bed with her blanket, Paul woke up. When all the kids woke up, they decided to hunt bees. This resulted in one broken and one cracked jar, and Jeri decided she wanted a different door, left the door to the cabinet open and Paul pulled out--and broke Walt's thermos. Mutt climbed on the bench in teh kitchen and ate Ned's left-over cottage cheese. Paul let his popsicle melt on the kitchen floor. Ned dropped his fudgsicle on the living room rug. Paul unfolded laundry. And my newly fixed dishwasher works all right, but the door won't stay shut and it stops every time the door pops open. Otherwise things are great.

Come to think of it, maybe she shouldn't read it. I'd like more grandchildren.